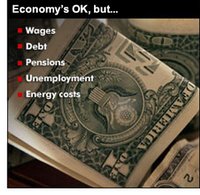 The Economy is souring, everybody take a deep breath…but don’t get comfortable…

A new report came out earlier this month reporting on the continual increase in economic measures. However, before you spend your day window shopping, realize a couple significant points:

I am passionate about politics. What I find the most interesting is the theater, strategy, and positioning. My writing revolves around political process and impacts of policy decisions. I completed my undergrad at Arizona State and MBA at University of St. Thomas in Minneapolis, MN. I have worked in the consumer products industry for the last 18 years for Gillette, P&G, Coca-Cola and Henkel. I am a husband of 18 years and father to four daughters (17,15,11,10).

This site uses Akismet to reduce spam. Learn how your comment data is processed.