Over the past 16 months, I have thoroughly enjoyed conservatives’ attempts to pin every one of our country’s problems on President Barack Obama. Of late, they’ve been calling the BP gulf oil spill “Obama’s Katrina.” This is such a non-sequitur that I can’t help letting out a little laugh each time I hear it. Oh yeah, because providing timely emergency response to a natural disaster threatening thousands of human lives, which IS the government’s duty (think FEMA and the numerous major hurricanes that our government has promptly responded to prior to Katrina), is so very much like plugging a deep sea oil well leak, which the government has no expertise in. Can anyone say ‘Apples to Oranges’? However, this spill should certainly cause any reasonable person to ponder the wisdom of doing more off-shore drilling and the adequacy of the current deep-sea drilling regulations regime.

Then there is the “Obama’s recession” refrain. This gets me laughing even harder because of the audacity of the revisionist history. Did not the real estate bubble both inflate and burst while Bush was still in office? The recession officially started in 2008. Obama did not take office until January 2009. (This isn’t to say that it is entirely the Bush Administration’s fault. It’s much more complicated than that.) Given how deep economists have told us this recession is (the largest since the Depression), I think the turn around has been impressive. Within 2 months of Obama’s inauguration, the economy was shrinking at about 6%. However, as of January 2010, the economy was GROWING at 6%. That is a 12% GDP turn-around in less than one year! Any macro-economist will tell you that the unemployment rate is the last economic indicator to recover after a recession. It always follows a stock market and GDP growth rate recovery. We’ve also seen a significant turn around in the stock market from its low in March 2009. It seems as though critics have expected an immediate and complete economic turn around within months; obviously they are using an entirely false standard. While there is ample evidence that things are getting much better, the economy still has a ways to go. An examination of the job loss rate over the past couple of years shows how things are improving. The graph below, from January 2010, shows a marked improvement from 2008. Between January and April of this year, the economy has created 573,000 jobs. While that pales in comparison to the over 8 million jobs lost during this recession, it is a very positive indicator given the trend in the graph below. The proof is in the numbers; we are in a cyclical recovery. What we all need is a little patience as we pull out of the Great Recession. 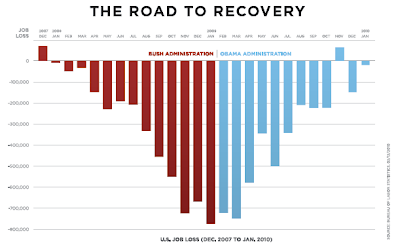 Jon Stewart captured the irony of conservatives’ use of various events from the Bush Administration as comparisons to alleged failures of the Obama Administration:

“No matter what happens during the Obama Administration, there’s the perfect Bush f*** up for the occasion…. The crazy part is, its conservatives and Republicans that are in the biggest rush to make the comparisons. ‘Remember that terrible thing Bush did, that we fought for 8 years to convince you wasn’t bad, but actually good? Well now we use those very incidents as the low watermark for your guy!’ And they are not just interested in comparing Obama’s new problems to Bush’s old problems. They’re also seeking to bequeath all that Bush oversaw, like some kind of cancerous heirloom… It’s like these guys treat the country as a sleazy used car salesman. ‘Ah, I gotta tell you this is a beautiful country, runs like a dream. We have kept it totally tuned for 8 years. Its cherry. You’re not gonna have a problem with it at all. Oh, you’ll take it? It’s your piece of sh*t now!’ … The best part is that they can’t even recognize their own tacit admission of the previous administration’s failure.”

(Skip ahead to 4:50 in the clip below for the relevant segment.)

I have been an active Latter-Day Saint all of my life and have also been an enthusiastic Democrat and progressive since my days as an economics undergraduate student at Brigham Young University. The hostile climate towards progressives at BYU inspired me to get involved with the BYU College Democrats, where I served as president during my senior year. I have since obtained a master’s degree in international relations from the University of Oklahoma. I served a full-time mission to the Philippines. I’m active in my local ward, happily married and have two rambunctious little boys and an infant daughter.

This site uses Akismet to reduce spam. Learn how your comment data is processed.